My review:  I love mafia romances and Hayley Faiman writes great ones. In Chosen by the Badman, Kiska is a true Mafia daughter.  Even though she is contacted to marry a man she doesn’t love, or can even stand for that matter, she is determined to go through with it. That is, as long as she can have three years of freedom to pursue her dream of dancing in New York.  Her father agrees as long as she has a bodyguard to keep her save the whole time.

Mafia member Konstantin has been getting pressure from his boss to settle down and find a wife.   Unfortunately all the woman available to him are either already contracted or married. Did he wait to long to find the right one?  When he gets the job to guard Kiska, he knows he is loss. How can he watch this beauty for three years and not fall in love? Doing so would mean death but the more time he spends with Kiska he can’t imagine living without her.  Great story and beautiful cover!!!

Konstantin Skumin has never wanted to sign on the dotted line for a woman of his choosing. While it is the Bratva way, it’s a tradition he refuses to practice. A badman with desires both dark and relentless, he is the opposite of gentle. Even so, it cannot be denied that he harbors dreams of romantic notions he will not willingly compromise.

Kiska Barysheva has resigned herself to her fate. In three years’ time, what little freedom she has as a Bratva printsessa will be ripped away from her. The ink has long since dried, and she will be wed to the man of her father’s choosing. The only dream she has to cling to will be short lived, but she refuses to take for granted a minute of her dancing career—her small glimmer of happiness.
Yet, when the scheming of their fellow Russian badmen puts Kiska in Konstantin’s care, everything they thought they wanted changes. Their love is forbidden—his touch worthy of death–but neither one of them has the strength to say no. Their hearts have chosen, and they can’t let go.
*Recommended for Readers 18+ due to, Language, Violence, & Sexual Content.

32 years young… born and raised in California, did a stint in Oregon only to return to the Golden State. Lived that life a while until the Lone Star State called to us, Hill Country, Texas is where we call home, where our boots rest and loving that country life. Living the life with one bearded power pole climbing husband, two little boys that are full of energy and drive us crazy plus a chocolate lab named Optimus Prime. 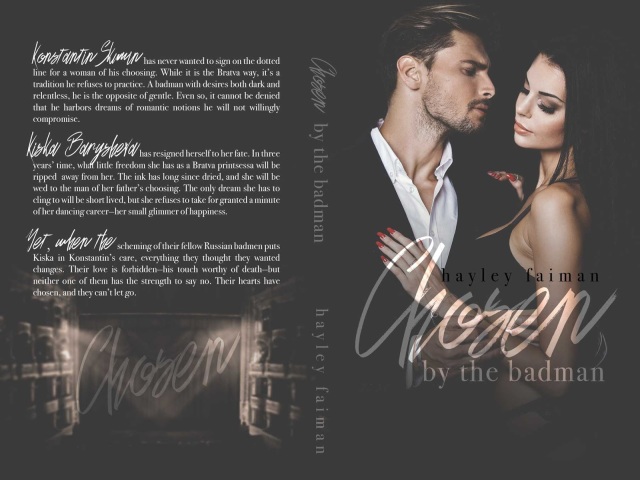