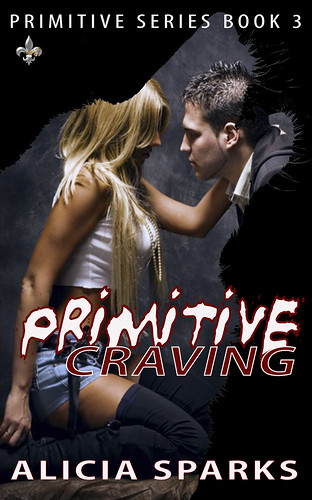 Ten years ago when Willow Maddux lost her soul mate, she lost her reason to stay loyal to the Maddux clan, a family of shape shifting tigers who live in a strong hold in the Atchafalaya Basin. However, she broke their sacred code when she dressed in tiger body paint and transformed in front of a live audience. Now she has to face the wrath of the Maddux Tribunal and the man who has sworn to bring her in—Timbre Canis.
Timbre knows a lot about broken codes. At the young age of eighteen, he joined the military and became part of a secret experiment, one that changed him from human to something more. When the wolf took over his body, he broke an unspoken law, one that changed the dynamic of his connection to his brothers. The only way to absolution is to track down renegade shifters and bring them in. But Willow is unlike anyone he’s ever met, and he’s afraid once he touches her, he’ll never be able to let her go. She awakens a Primitive Craving he’s never felt before.
Primitive Craving on Goodreads
~*~*~*~*~

Hitching his backpack up onto his shoulder, he stilled, hearing an unfamiliar sound just a few yards away, a sound filled with warning. When it finally registered what was happening, he hit the ground just in time. The bullet whizzed past him and sank into the tire of a nearby car. He spun around to see the man approaching and knew he had been found by one of the guys who worked for Himani. He could smell the woman’s chemicals on the guy’s skin even from across the parking lot. Rolling onto the ground and moving behind the car, he reached into his bag and pulled out his Glock, never taking his eyes off the man. He was steadily approaching, his gun raised, with his eyes locked onto Timbre.
With his gun trained on the man, Timbre prepared to fire a second before the scream pierced the air. Both the scream and the scent hit him at one. She was here and she was in danger. He saw movement out of the corner of his eye and felt her as she ran past him. Another shot rang out and he felt his stomach clench into a knot. He saw red, his vision blurred by the anger and panic that seized him. If she was hurt because of him…
He cut off the thought, unwilling to finish it.
Timbre couldn’t see her, but he could feel her panic as if it were tangible and wrapping around him. Crawling forward, he saw she had ducked behind a nearby car and was clinging to the tire, all the color drained from her face. She looked back at him with a panicked expression.
“Stay down,” he mouthed, giving her a hand signal in case she couldn’t understand him. She nodded frantically.
Peeking around the car, he looked for the man, but he had disappeared, probably hiding behind one of the vehicles in the crowded parking lot. He had to make his way to the girl and show her everything was going to be okay. He had to get her out of here.
Gauging the distance to her, he looked around one more time before making a crouching run to her. Another shot rang out, this time damned near deafening him with its proximity.
“Fuck!” He rolled onto his back and then rolled over again, this time landing right next to her.
“What is going on?”
“Nothing I can’t handle.”
“Someone’s shooting at you. Don’t you want to call the cops?” She pulled out a cell phone, but he noticed how her hand shook.
“It’s okay. My car’s over there.” He covered her hand with his and gave her a squeeze. “Black SUV. Two rows over.”
“Okay.” She twisted her head to the side, locating the car, which was as dark and mysterious as the man crouched next to her.
“Here’s my keys. You take the lead. I’ve got your back.” He noticed she had a backpack hitched up onto her shoulder and realized she was probably about to leave the hotel when the shots rang out.
She took the keys. “Okay, but there’s no way I can drive right now.”
“Come on.” He took her hand in his and pulled her away from the car, all the while watching for the gunman. “I want you to stay down. I’m going to open the door and I want you to slide in to the front seat and keep your head down. I’ll climb in behind you, okay?”
She nodded.
“On three.”
She nodded again.
Without taking too much time to think about it, he pulled her to him and gave her a quick kiss, barely pressing his lips against hers. Then they backed away from the car where they had taken cover and made their way to his vehicle. He slowly opened the door and turned to her.
“Stay down,” he reminded her. She nodded.
Climbing in after her, he raised himself up enough to make sure he wasn’t going to back into anything, then he started the vehicle. Two more shots were fired before he got out of the parking lot, bouncing off the dark glass.
She let out a scream then a curse. “The fuck? Bullet proof glass? Who are you?”
“Are you okay?” He glanced over to make sure she hadn’t been hit.
“Yes. Just go!”