Lana Washington chooses to hide. She hides from life. Hides from her abusive ex-husband. From the fact that everyone she loves eventually she loses, but when Lana’s house catches fire she is forced out of the predictable comfort her life has become.

Jake Weston had led a simple life, ever since he was called home from war for a family emergency four years ago, leaving only him and Hallie. Then one phone call throws his neatly-pieced world upside down.

Jake wasn’t supposed to be there. This wasn’t his problem. But as soon as those piercing green eyes focused in on him, he knew he was done for.

Can Jake hold onto his secret, all the while still holding onto Lana?

Will Lana be able to let go of the past and the hurt that binds her to her lonely existence?

Or will one small white lie ruin it all?
ADD TO GOODREADS

Stephanie is a Happily Ever After addict.

Loving mushy romance, books, movies and music since she was young, and constantly daydreaming up stories and plots, Stephanie decided to put them on paper.

Living in South Australia with her own alpha male and two princesses she spends her days reading, writing and playing with the girls out on their property.

Best Selling Author J.L. Beck brings you a book series where the love is scorching hot, and the danger is just as intense…

A collection of three best selling books which will be available for ONE month only. This boxed set contains a new release, with a never before seen novella written strictly as a gift for J.L. Beck fans. That’s FIVE books for less than a dollar!!

18+ ONLY due to mature themes, and matter.

Indebted
It was suppose to be a debt settled, just a price being repaid.
Instead love was born … from unpaid dues it bloomed.
See, that’s the funny thing about love, you never expect it.

Inevitable
She was never part of the plan.
She was never to become anything.
She was simply a payment, and once the
debt was settled, she would be nothing to me.

Invincible
FBI Agent Devon Mitchell is trying everything
he can to move on with his life.
Except he can’t.
After losing the one person he loved more
than life itself, he struggles to carry on with
the guilt and burden of letting her go.

Injustice
I wasn’t a victim. I wasn’t prey to the monsters
that lurked in the dark — at least that’s what
I told myself. Trouble had found me, I was sold to
the mafia by my family. I was now property of the drug
cartel ran by the Russian Mafia, and to be sold to the
highest bidder. What happened was never to be expected.

J.L. Beck is the best selling author of numerous books including
Indebted, Inevitable, Invincible, and The Bittersweet Series. She’s best
known for weaving a tale, that ends with your mouth hanging open, and
your hands gripping the edge of your seat.


She’s a no holds bar
author who enjoys spending time with her husband of seven years, three
year old hellion, and Hatchi the fur baby. She calls Wisconsin home, but
loves to travel. In her free time you can catch her watching bad
reality tv, cooking, reading books, or spending time outdoors.


Follow her to see what wicked adventures she’s up too…

A discharged Army Ranger, Ben considers his job as a BDSM club security guard to be an excellent hobby. He’s never been tempted to join in. But everything changes when the notorious Mistress Anne inadvertently reveals the caring heart concealed beneath her Domme armor.
Now, he’s set his sights on the beautiful Shadowlands Mistress. Maybe he’d considered himself vanilla, but she can put her stiletto on his chest any day, any time. He’ll trust her delicate hands to hold his heart. And if she wants to whip his ass on the way to an outstanding climax, he’s just fine with that too.
Sure, he knows she likes “pretty boy” slaves. And he’s older. Craggy and rough. And six-five. Minor hindrances. The mission is a go.

He’d always been considered family, but when the youngest
Long grew up the last thing he saw was a sister.
“A story of family… a cowboy you can’t help but love.”-Randi
Alexander NYT & USA Today Best Selling Author

Sunshine Parker didn’t walk away from Tender Root, he ran. Joining the rodeo let his body be beaten by broncos for money, instead of his father for free. After an injury forces him to return to his hometown, he heads to the Long Ranch, the one place that’s always accepted him.


Melody Long is Long Ranch’s first cowgirl in a hundred years. With brothers and cousins always looming in the background, Melody had given up on dating long ago. Now back from college, she uncovers something even the Long name can’t protect her from.


Men who want to survive keep Melody at arms length. But Melody isn’t the bookworm Sunshine remembers growing up, and it’s hard to hide his new found lust. Will his desire cost him the only place he’s ever considered home?

Add it to Goodreads HERE


Michel Prince is an author who graduated with a bachelor degree in History and Political Science.


With characters yelling “It’s my turn damn it!!!” She tries to explain to them that alas, she can only type a hundred and twenty words a minute and they will have wait their turn.  She knows eventually they find their way out of her head and to her fingertips and she looks forward to sharing them with you.


When Michel can suppress the voices in her head she can be found at a scouting event or cheering for her son in a variety of sports.  She would like to thank her family for always being in her corner and especially her husband for supporting her every dream and never letting her give up.


Michel has been awarded Elite Status with Rebel Ink Press in 2013, the service award for her local RWA chapter Midwest Fiction Writers and is a Pro member of RWA.  She lives in the Twin Cities with her husband, son, cat and new puppy.


If you’d like to join Michel’s Street Team contact her assistant at contact@romancenovelpromotions.com and she’ll get you added.

I am thrilled and honored to have both of my Gangster books up for awards right now.

The Gangster’s Kiss is up for a RONE for Best historical.

and The Gangster’s Woman is up for best cover and Rising Star.

Blurb Sins of a Bad Boy by Soraya Naomi

William Kade was a renowned fighter who fought hard and played dirty. He titillated all women and was rejected by none – he was an Original Bad Boy.
An orphan who came from nothing, William became a ruthless businessman who desired to build an empire from a gaming club and an illegal fight club with his best friend and mentor, Charles Lindon.
But when profits declined, Charles and William ventured into a new world and decided to open the first hardcore sex club in the U.S. More money was needed to expand their business; however, when debts of the gambling club weren’t being paid, they were forced to take drastic measures to secure a steady cash flow. Drastic measures that involved Ivy, a woman William already had unfinished business with. A woman that might be the only female that equally annoyed and intrigued him.
When William and Ivy start to play a game, the stakes become higher with each passing day until no one can find a sane way out anymore.

No one feels the depth of your pain, only your own heart.

About Author Soraya Naomi
I was born in South America in 1984 and raised in Europe where I presently reside with my fiancé.
I read many genres but favor intense, dark, seductive, and provocative novels where the male character loves fiercely, without remorse or boundaries. I also adore forbidden love tales and have an odd fascination with kidnapping romances. No, I don’t secretly want to be kidnapped, though!
I have a passionate obsession with the written word and indulge in chocolate pastries much too often.
My debut novel For Fallon (Chicago Syndicate, #1) was released on July 26, 2014. I’m honored that For Fallon won “Best Breakout Novel 2014” in the Novel Grounds Semi Annual Literary Awards.
For more information about the novel and author:
WEBSITE – http://www.sorayanaomi.wordpress.com
FACEBOOK – http://www.facebook.com/sorayanaomi.author
TWITTER – http://www.twitter.com/Soraya_Naomi
INSTAGRAM – http://www.instagram.com/soraya_naomi
GOOGLE+ – http://tinyurl.com/lac4p5d
AMAZON AUTHOR – http://tinyurl.com/jwadol3

What if love-at-first-sight was not the “first-sight” after all?

Natalie Star is a modern woman, with modern sensibilities. Practical and realistic, she finds herself falling for a man named Thomas Andrews. Thomas is a perfect gentleman, but his love for her seems to be old, solid, staid—the kind that grows after years of love and life together. He speaks in riddles when she asks why he seems to know her so well—they were together in a time she can’t remember yet.

Thomas longs to tell Natalie everything he knows about her, about them. But it’s time that is the problem yet. There is a tragedy that they must endure before she can fully accept who they are, and why they are destined to be together. A tragedy that Thomas has been through once, and will go through again to find the piece of his heart that has been missing all these many years.

That tragedy is the Titanic… 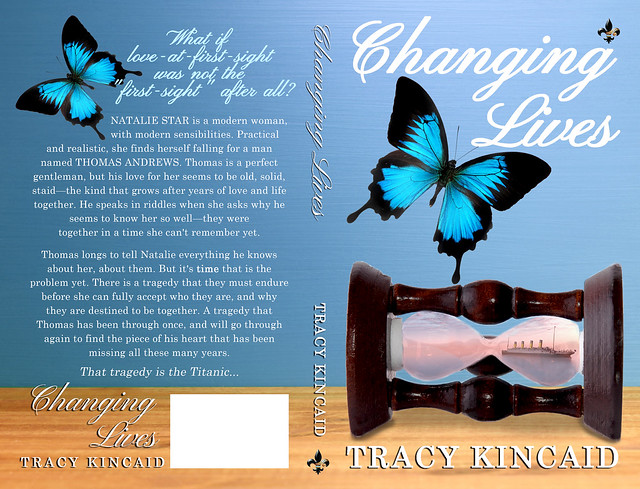