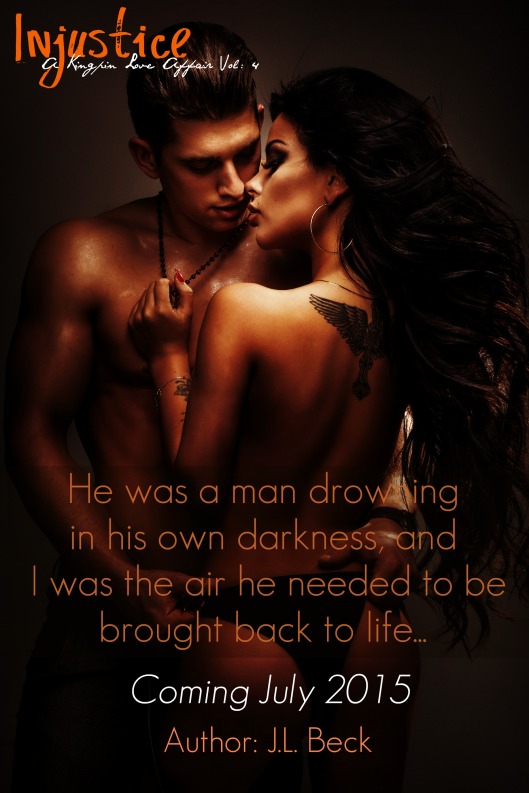 “You’re not her hero, you’re her darkness.”
A
complete series with over 400,000 words, and over 200 chapters.
-Warning
this book series contains graphic violence, explict sex scenes, and dubious
content. Not for those under the age of 18.
That’s
FIVE books for the price of #99Cents. #Preorder your copy today and be entered
in to win an #IpadMini just send POP to jobeck0813@gmail.com and
you’re entered in.
KOBO:
http://bit.ly/1K6kEE0
ITUNES:
http://apple.co/1SjCWY9
AMAZON
US: http://amzn.to/1HpJ0Wk
AMAZON
UK: http://amzn.to/1HXBDpm
AMAZON
AU: http://bit.ly/1KRtnu5
AMAZON
CA: http://amzn.to/1GmFBeJ

Adriano Montesi’s life has always revolved
around women, his family, and the Chicago Syndicate. As a Capo and Luca
DeMiliano’s right hand man, he’s one of the four highest ranking men in the
organization, and he’s fought many to maintain his position.

Adriano’s current assignment is locating Camilla
Guillermo, the one woman who’s captured his attention beyond a simple fuck. He
and Cam have a history together that no one knows about, and now that she’s
disappeared, he’s eager to find her and discover her sordid past. What might
seem like a routine mission has become an obsession for Adriano.

Italian beauty, Camilla Guillermo, is lost and
alone in the world. Running away from a past that haunts her and the man that
deceived her. But wherever she goes, Adriano is always with her, always in her
thoughts.

Out of money and out of options, Cam has no
place to turn but back to the Loop, back to the one place she wants to avoid.

When Adriano finds Camilla, everything between
them will change. No matter how much they are drawn to each other, Cam is now
off limits by boss’s orders. And in the Chicago Syndicate, you don’t defy the
boss’s orders unless you’re prepared to live with the consequences.A romantic suspense.

For Adriano
(Chicago Syndicate, #3) by Soraya Naomi
Excerpt: Adriano’s point of view
As I climb the stairs to the strip club of the
Syndicate’s three-story headquarters, located alongside the North Shore of
Chicago’s suburbs, I already recognize voices coming from the room at the end
of the hall.
I’m greeted by Luca and James, who are in the middle
of the room beside the rounded burgundy sofa. I nod to both of them and fix my
focus on the unknown woman with an attractive bob standing next to James. I’m
usually not a fan of women with short hair, but who is this delectable creature?
James takes his cue to introduce us. “Adriano, meet
Camilla. She’ll be working here at the club from now on.”
Why did he suddenly
hire someone new? We’re not understaffed.
I can’t help but stare at her. My god, her legs go on
forever; she’s almost as tall as I am, and I’m over six feet. I inspect her
body slowly, like no one is watching, and when I reach her face, I’m pleasantly
stunned that she’s challenging me with an arc of her perfectly shaped eyebrow.
Her eyes are deep brown, heavily lashed, and slightly tilted up at the corners.
Her cheeks are delicately boned. She looks absolutely appetizing in a tight,
black knee-length dress. Sexy, yet not too revealing. In other words, she’s
smokin’ hot!
“Camilla, nice to meet you.” I go old-school, take her
hand in mine, and kiss her knuckles.
Luca hides an eye-roll, but I catch it and grin.
“Adriano,” she says huskily.
Her voice is hoarse. Hoarse in the sexiest way I’ve
ever encountered. I didn’t expect that sensual voice to accompany this striking
woman who smells like vanilla. With her, my obsession with vanilla ignited.
“Welcome to our little establishment.” Then I address
James while holding on to her hand, “What will she be doing here?”
“Bartending,” James answers.
“Then I better show her the ropes.” I let the pad of
my thumb swirl over her fingers, and she shivers noticeably; she’s not immune
to my charms.
And I guide this interesting woman to the bar, which
is a stainless steel and black granite area that’s open at each end and set up
like a juice bar.
She speaks before we step behind it. “I can make
drinks.”
Her simple statement has me confused.
“You look like you don’t believe I can tend the bar,”
she elaborates.
Oh no, sweetheart, I’m
not doubting your qualifications. I’m just staggered by the sex vibes you’re
throwing around with that voice and those gorgeous lean legs.
I smirk while extending my hand, inviting her behind
the bar. “No, I believe you.”
That was the first night I tried to get Cam into my
bed. I failed that night and for over three months after and almost gave up my
chase, but it was too much fun to try to capture her. I don’t even think she liked me at first.

About
Author Soraya Naomi
I
was born in South America in 1984 and raised in Europe where I presently reside
with my fiancé.
I
read many genres but favor intense, dark, seductive, and provocative novels
where the male character loves fiercely, without remorse or boundaries. I also
adore forbidden love tales and have an odd fascination with kidnapping
romances. No, I don’t secretly want to be kidnapped, though!
I
have a passionate obsession with the written word and indulge in chocolate
pastries much too often.
My
debut novel For Fallon (Chicago
Syndicate, #1) was released on July 26, 2014. I’m honored that For Fallon won “Best Breakout Novel
2014” in the Novel Grounds Semi Annual Literary Awards.
AUTHOR MEDIA LINKS
WEBSITE – www.sorayanaomi.wordpress.com
FACEBOOK –www.facebook.com/sorayanaomi.author
TWITTER – www.twitter.com/Soraya_Naomi
INSTAGRAM – www.instagram.com/soraya_naomi
GOOGLE+ – http://tinyurl.com/lac4p5d
AMAZON AUTHOR – http://tinyurl.com/jwadol3
GOODREADS – https://www.goodreads.com/author/show/8153734.Soraya_Naomi

Best Selling Author J.L. Beck brings you a book series where the love is scorching hot, and the danger is just as intense…

A collection of three best selling books which will be available for ONE month only. This boxed set contains a new release, with a never before seen novella written strictly as a gift for J.L. Beck fans. That’s FIVE books for less than a dollar!!

18+ ONLY due to mature themes, and matter.

Indebted
It was suppose to be a debt settled, just a price being repaid.
Instead love was born … from unpaid dues it bloomed.
See, that’s the funny thing about love, you never expect it.
Inevitable
She was never part of the plan.
She was never to become anything.
She was simply a payment, and once the
debt was settled, she would be nothing to me.
Invincible
FBI Agent Devon Mitchell is trying everything
he can to move on with his life.
Except he can’t.
After losing the one person he loved more
than life itself, he struggles to carry on with
the guilt and burden of letting her go.
Injustice
I wasn’t a victim. I wasn’t prey to the monsters
that lurked in the dark — at least that’s what
I told myself. Trouble had found me, I was sold to
the mafia by my family. I was now property of the drug
cartel ran by the Russian Mafia, and to be sold to the
highest bidder. What happened was never to be expected.
BONUS NOVELLA: Infringed featuring Alzerro King, and Bree King from Indebted, and Inevitable.

The Sons of Dusty Walker, four books by some of your favorite cowboy authors: Desiree Holt, Jodi Redford, Sable Hunter, and Randi Alexander

Get your copy of all four books at Amazon:

When Dusty Walker’s untimely death brought his four sons to Red Creek, Kansas, they were in for more of a shock than just his death. None of them knew
about the others. Nor did they expect to hear the strange terms of his will. They might share last names, and even a special belt buckle, but they also
shared a lot of resentment.

Dylan is struggling to follow his dream of being a country musician and dealing with yet another shock from the woman who suddenly came back into his life.

Jackson’s life is on the rodeo circuit and doesn’t include any permanent arrangements, including a woman.

Killian dreams of owning a ranch where he can raise Appaloosa horses, and he doesn’t plan to do it in Nowhere, USA.

Rogue doesn’t know what to do with the naked woman in his bed or the direction his life seems to be taking. He’s a loner pure and simple.

If the brothers want their share of the half billion dollar estate, they have to follow the terms of the will…one week in Red Creek running the business
and getting to know each other. None of them can begin to predict how drastically their lives are about to change. 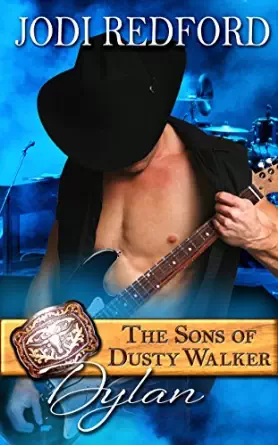 His music opened her heart. Her love healed his soul. But a legacy of secrets could tear them apart. 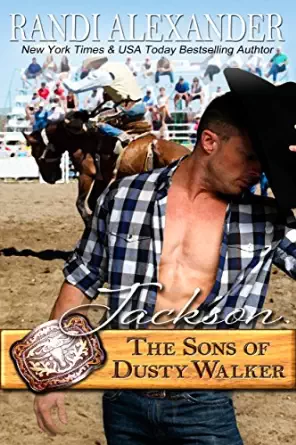 Rodeo bronc rider Jackson Walker’s world is about to be bucked upside down by a woman who holds a low opinion of rodeo cowboys. 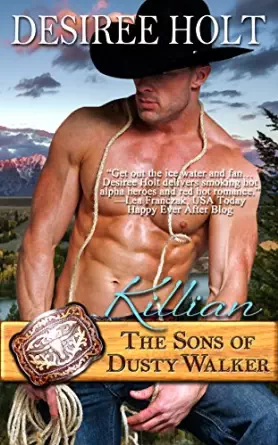 Killian Walker’s dream of owning a ranch is about to come true—or is it? What will he have to do to realize it and what about the woman who unexpectedly
blasted into his life? 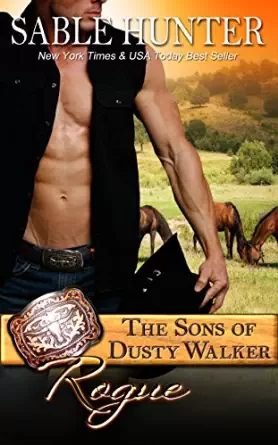 Loner. Renegade. Gambler. Rogue isn’t wired for love and family…until he gets a second chance with the one woman who can prove him wrong.

Checking out these 4 AMAZING authors!

At the ripe age of seven, Jodi Redford penned her first epic, complete with stick figure illustrations. Sadly, her drawing skills haven’t improved much,
but her love of fantasy worlds never went away. These days she writes about fairies, ghosts, and other supernatural creatures, only with considerably more
heat.

She has won numerous contests, including The Golden Pen and Launching a Star.

When not writing or working the day job, she enjoys gardening and way too many reality television shows.

Sable Hunter is the pen-name of Rebecca Schaefer who splits her time between Louisiana and Texas. She is a NYT and USA TODAY bestselling author who has
written over fifty books so far, mainly contemporary western romance. Her goal as a writer is to make the readers fall in love with the characters, laugh
with them, cry with them – and fan themselves at the ‘hot’ scenes. Sable creates a world where right prevails, love conquers all and holding out for a hero
is not an impossible dream.

Published with Cleis Press, Wild Rose Press, and self-published, Randi writes smokin’ hot romance with heroes who’ll have you begging to ride off into the
sunset with them. When she’s not dreaming of, or writing about, rugged cowboys, Randi is biking trails along remote rivers, snorkeling the Gulf of Mexico,
or practicing her drumming in hopes of someday forming a tropical rock-band.

Saddle up! And prepare yourself for the sexier side of happily ever after.

Randi Alexander loves to connect with her readers! Say “Howdy” at https://twitter.com/Randi_Alexander,
sign up for her newsletter at http://RandiAlexander.com/, and fall head over spurs for her cowboys at https://www.facebook.com/pages/Randi-Alexander-Books/401939699893294

“Rode Hard and Put Up Satisfied”

Has won an EPIC E-Book Award, the Holt Medallion and many other awards. She has been featured on CBS Sunday Morning and in The Village Voice, The Daily
Beast, USA Today, The Wall Street Journal, The London Daily Mail and numerous other national and international publications

Learn more about her and read her novels here: