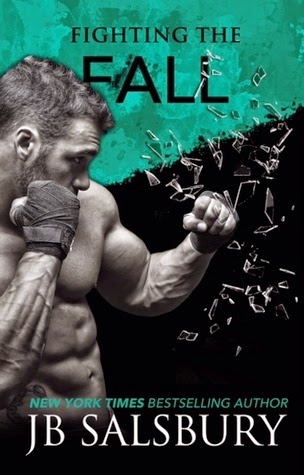 The toughest fighters aren’t created in the octagon but are born of necessity. When life delivers blow after punishing blow, you fight back or get destroyed.

Eve Dawson has had her fill of bad luck. A string of unhealthy relationships has left her angry, bitter, and frustrated. She’s given up on being happy and settles for content. Swearing off men, she repels advances and makes herself a challenge to even the most persistent suitors. After all, how much can the fragile human heart take? But life isn’t finished with her, and when things can’t possibly get worse . . . they do.

STAY ON YOUR FEET

It’s Cameron Kyle’s motto, but with his fighting career ripped from his grasp, a child he wasn’t strong enough to save, and a marriage that even the brawn of a heavyweight couldn’t hold together, it’s getting harder and harder to stay upright. He takes on the position of CEO of the UFL, intent on hiding his biggest weakness in order to forge a path that leads him back into the octagon.

When an old rival mysteriously gets wind of Cameron’s plan to fight again, he comes out of retirement to settle old debts, but secrets, lies, and betrayal threaten to deliver the death-blow. The distraction of a sass-mouthed girl seventeen years his junior is the last thing he needs until a tragic accident shatters the firm foundation of his resolve and he realizes just how far he’s fallen.

Will they risk it all and fight to be together?

OR DOES DEFEAT LIE WITHIN THE FALL? 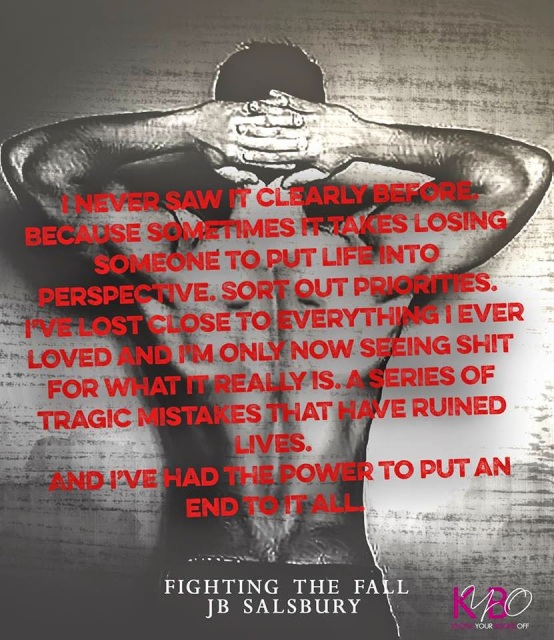 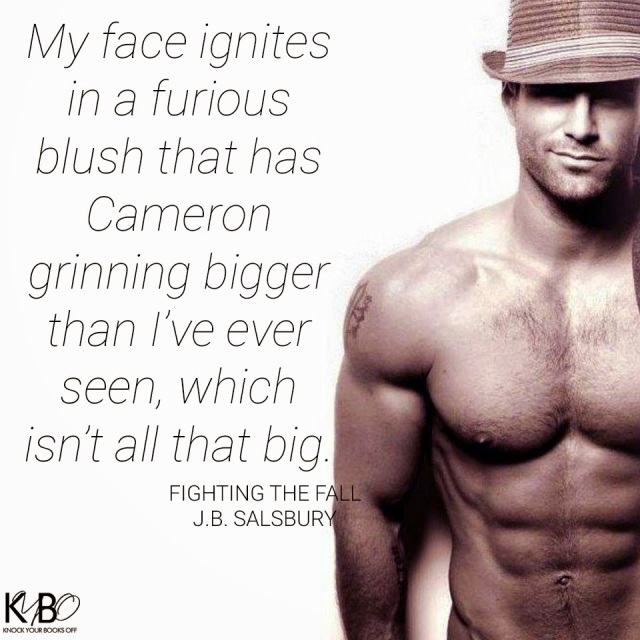 Meeting with the whiners. Check. Weigh-ins. Check. I’m flipping through the pages and checking off things I’ve completed when I feel her eyes on me.
I don’t look up from my lists, but hear her feet on the carpet and finally the sound of creaking wood as she takes a seat across from me. “You got something to say?”
“Can I ask you something?”
“As long as you make it fast.” Her silence brings my eyes to her contemplative expression.
“I noticed you’re not married.” She tilts her head to my left hand that is very much without a wedding ring.
Not anymore. “And?”
“Nothing really. Just surprised.”
I lean back in my chair as irritation pinches my brows. “Surprised.”
She shrugs. “Yeah, I mean you seem like a decent guy.”
I’m not. “You seem like a decent woman and you aren’t married.” I nod to her empty left ring finger.
She grins. “That’s because I just got divorced. Marriage jumping isn’t my thing.”
This feels like one of those you-share-I-share conversations that I do not participate in. I find if I can bite back my impulsive outbursts and stay zipped people eventually give up.
She twirls a strand of her long blond hair. “Ever been married?”
I lock my jaw and wait, but she doesn’t fucking budge and stares with expectant eyes. Something tells me we’ll be here all day if I don’t give her something. I’d lie, tell her I’ve never been married, but if I plan on digging in here for the long haul, I’m going to have to give her enough to keep her satisfied.
“Once.”
Her eyes light up as if she just realized we belong to the same super-secret club. “Really.”
What is it about sharing that creates this weird expectation from people? As if simply telling another person about your past allows them some special access into friendship. I don’t do friendship.
I flip through my notebook and hope like hell this conversation is headed toward The End.
“Any kids?”
My hand freezes mid page-turn, and a whisper of pain echoes through my gut that would usually be followed by a cringe, but not anymore. I clear my throat and refocus on my notebook. “I have a son.”
“Oh, that’s cool.” She’s silent for a few beats that are probably uncomfortable for her but don’t bother me at all. “I have a daughter.”
The rumble of an old hurt reverberates against my shield. Ten years ago those words would’ve bled me alive, but not anymore. “Mm.”
“How old—”
“Look, I really have a lot to do.” I’m still studying the pages of my notebook like a complete asshole, but honest to God it’s as if we’re about to bust out some knitting needles and tiny sandwiches.
“Sure thing.” She hops up and moves toward the door when she turns suddenly. “Oh, I forgot. We’re having a party after the fight tonight. The Blackout. You should come.”
“Thanks, but”—I flip a page and another—“I think I’ll go home after the fight. Long day.”
“Suit yourself. If you change your mind, we’ll be there.” She’s gone with the soft click of my office door.
After party. Haven’t been to one of those in a while, at least not many I remember. The little flashes I’ve managed to retain carry good feelings of camaraderie with the team. I groan and lean back in my desk chair. My goal is to get back into the octagon, but until then I need to run this organization and put it back on its feet. The fighters got screwed by Gibbs and are having trust issues. I get that. Maybe showing up at this party is a smart move after all. Just for one drink. Should be painless enough.

With my head down, I make way to my car when I notice a familiar car parked next to mine. I look up and my steps freeze just feet away. Leaning against my car, arms crossed at his chest, long powerful legs crossed at his ankles, is Cameron.
My hand clutches my purse to my side. “Hey, what are you doing here?” I internally scold myself for sounding more defensive than happy to see him. He can’t possibly know what’s in my purse.
It’s been days since I’ve seen him, and our quick telephone conversations do little to slake my desire to see him in the flesh.
He shrugs. “Passing by, saw the place was closed for the night. Thought I’d hang out and see if I could speak to the manager.”
My stomach jumps and goes warm. He came all the way here just to see me?
“Did you have a bad experience? Like to make a formal complaint?”
He pushes off my car and takes two steps toward me. Close, but not close enough. His eyes set in their usual glare, he shoves his hands into the pockets of his dark washed jeans. “Mmm . . .” He rubs his fingers across his lower lip, as he did the night in front of Mason. His eyes burn through me. “I have no complaints about my . . . experience.”
His presence combined with his insinuation become too much and I drop my gaze. A tickle of caution pricks at my subconscious, reminding me that I’m not the kind of girl who shies away from flirtation. I’m not timid, demure, or easily swayed by just any man. But there are a few who have brought me to my emotional knees, and both of them I dislike. Immensely.
His feet move into my line of site, and I pull my gaze up to settle on his face. How is he even more beautiful than I remember with all that thick dark hair, his fierce jaw, and full lips that I know are as powerful as they are soft?
“What’re your plans tonight?” He reaches out and brushes my bangs off my forehead.
Such a tiny gesture, but the sweetness of it makes my eyes flutter. “I was going to grab a bite to eat.”
His eyebrows pinch together. “You hungry? I’ll take you to dinner.”
I look around at the empty parking lot then move my eyes back to his. “Now?”
“You hungry now?”
“Very.”
“Then yeah. Now.”
“But it’s the middle of the night.”
The corner of his mouth lifts so slightly it’s barely noticeable. “It’s Vegas, babe.”
“But I’m in the mood for a bacon cheeseburger.” I lick my lips. I can almost taste the greasy goodness. “With green chilis.” My stomach grumbles in agreement. “And onion rings. Not the battered ones, but those breadcrumb ones.” I hum low in my throat. “Oh, and a chocolate milkshake or an ice cold beer will also do.” I tap my lips, thinking. “Hm. Maybe both.”
So lost in my food-fantasy I don’t notice the way he’s staring at me until I focus on him. His glare isn’t as tight as it usually is, and his mouth isn’t the straight—but full and kissable—line it usually is. It’s as if someone pulled the starch from his expression, not completely relaxed, but tender. 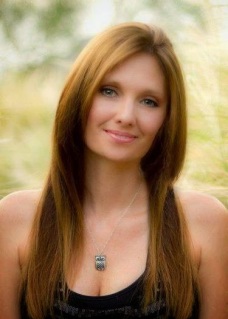 JB Salsbury, New York Times Best Selling author of the Fighting series, lives in Phoenix, Arizona with her husband and two kids. She spends the majority of her day as a domestic engineer. But while she works through her daily chores, a world of battling alphas, budding romance, and impossible obstacles claws away at her subconscious, begging to be released to the page.
Her love of good storytelling led her to earn a degree in Media Communications. With her journalistic background, writing has always been at the forefront, and her love of romance prompted her to sink her free time into novel writing.
Fighting for Flight, Fighting to Forgive, and Fighting to Forget are the first three novels in the MMA romance series. Fighting the Fall is due to be released in November 2014.
For more information on the series or just to say hello, visit JB on her website, Facebook, Twitter or Goodreads page.