Continuing the Soul’s Desire Series with book 2 Unforgettable Hearts Ellie Benton lost all contact with her childhood friend, Tyler Stuart, when she moved with her family to New York. For seven years she’d mourned the loss of the copper-haired boy whom she’d secretly admired her entire life. Saddened by the thought that he’d forgotten her, Ellie carried on with her life, but nothing could fill the void he’d left in her heart. When an unexpected trip reunited them after such a long time, Ellie found herself unable to resist the strong pull she felt toward him, nor control the feelings she’d fought so hard to keep at bay. Tyler’s initial coldness at the sight of her made her question if he’d ever cared about her, but soon she discovered things she’d never even dared dream of, secrets that turned her soul inside out and brought her more joy than she’d ever experienced. Tyler proved to be the man of her dreams, exactly how she’d imagined him. But, as they embarked on a passionate relationship—just when she thought she’d finally found her happiness—demons from their past and present threatened to separate them. Will their love overcome all the obstacles they have to face?

– Unforgettable Hearts Emily A. Lawrence I saw Tyler’s fingers tighten around the glass, squeezing it so hard I feared it might shatter in his hand. It only took seconds. First there was a crack, then his eyes became slits, and before I could react, the crystal glass broke, slicing his palm open. “Tyler!” Caitlyn jumped, a look of horror on her face. “Dammit!” Tyler growled and grabbed a towel, pressing it against his bleeding wound. I felt my stomach lurch and my heart beat a hundred miles per hour. “Son, what did you do? Let me see that!” Alfred was by his side, but Tyler got up from his seat and stormed out of the dining room, causing several heads to turn. “I’ll go,” I said and rushed after him. “Tyler, wait up! Tyler!” I managed to catch up with him when he stopped to open his door. “Go back, Ellie. I’m fine,” he said through gritted teeth. “No, you’re not. You’re bleeding!” I followed him into the bathroom and watched him turn on the cold water, getting his blood all over the faucet. He put his hand under the clear water and grunted when it poured over his wound. He rinsed off as quickly as he could, but it didn’t stop the bleeding. “You might need some stitches—” “No, it’s not that deep.” I opened the medical cabinet on the wall. “At least let me put some alcohol on it. You don’t want it to get infected, do you?” After opening the bottle I grabbed his wrist to hold him in place and poured a bit on the bleeding wound. Tyler growled, then mumbled all kinds of despicable things, half of which I couldn’t understand. He thrust his hand under the stream of water again and waited until it ran clean from his wound. The pain seemed to be subsiding since his body relaxed. He examined the wound closely. “It’s not as severe as I thought it was. It still burns, though.” “Sit down and let me bandage you,” I said, taking what I needed from the cabinet. He sat down on the edge of the tub, but stuck his hand behind his back when he saw me grab the bottle. “Oh, no. No more alcohol.” “Don’t be such a baby. Come on. The faster I finish this, the sooner I’ll leave you alone.” Saying those words hurt, but it was the painful truth. Whatever pain he was feeling, mine was multiplied by thousands of times at the thought that he didn’t want me around him. His jaw clenched, and said nothing in return. I had half expected him to tell me I was mistaken, but he didn’t. Giving me his hand, he let me clean and bandage his wound. The proximity was killing me slowly, and it took all I had to keep from wrapping myself around him and settling into his arms. I ached to hear that he’d missed me and have the harrowing weight lifted off of my heart, but his lips remained sealed and not one word came out as I attended him. Saddened, I reflected deeply on our past relationship and how much it had meant to me, feeling the poignancy of everything we’d shared in good times and bad. I wondered if perhaps this was the beginning of the saddest time of all, as the pain I felt in all the years we’d been apart was nothing compared to the way I felt now. Holding my breath to avoid inhaling his masculine scent, I tried to swallow the raw pain scraping its way toward my mouth as a scream demanded its exit. “There…you’ll be okay, but maybe you should let your dad have a look at it—” “Stay away from that man,” he said and grabbed my wrist unexpectedly. My heart jumped into my throat, blocking my windpipe. My throat contracted around the emotions which threatened to leap up and out of my lips, my stomach tensed and my insides felt like they were tied into a knot. “What?” I barely whispered, glaring at him perplexed. “You heard me. Stay away from that Andrew whatever.” Tyler was dead serious, his voice dry as bones. Was that what had caused his anger? Him seeing me with the other man? There was a small flutter of hope in my tummy, but I wasn’t sure what to think anymore. 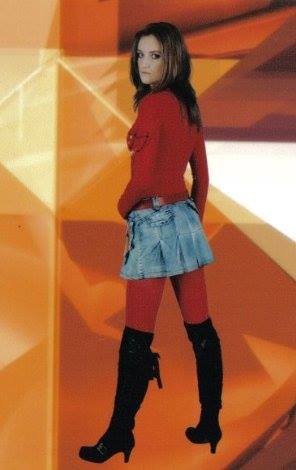 Emily A. Lawrence lives in Transylvania with her family, hence her love for vampires and paranormal books. She is extremely passionate about fiction and has been writing stories, mostly fan fiction, for years now, but only began thinking seriously about publishing approximately a year ago. Having her family’s support, and encouraged by friends and fellow authors, she pursued her dream of becoming a published author.