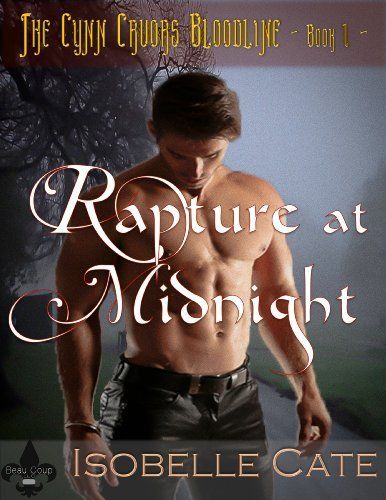 There is an on-going war between two breeds of immortal warriors who carry human, vampire, and werewolf blood, the Cynn Cruor and the Scatha Cruor. The Cynn Cruor wants to live in harmony with the human race. The Scatha Cruor wants to enslave them. Finn Qualtrough, a Cynn Cruor warrior is on a mission to find Dac Valerian, the leader of the Scatha Cruor responsible for the deaths of many, including his parents. When he pursues three Scatha warriors who can lead him to Dac, he happens upon a woman who awakens a desire within Quinn to claim her as his own.

She is the very essence of his immortal life.

Eirene Spence is an insomniac and a computer genius who loves walking in the park at midnight. She stumbles upon the Scatha Cruor and is almost killed until a handsome stranger rescues her. His touch ignites a hunger inside her that only he can satisfy.

He is her soul.

By some twist of fate, one of Eirene’s clients is Dac Valerian. She is able to tell Finn and the rest of the Cynn Cruor where Dac is hiding. Now Dac wants her dead.

Will Finn be able to keep Eirene alive and at the same time fulfill his mission? Will Eirene’s wish to be part of Finn’s life come true knowing that he is destined for someone else?

Eirene screamed when she felt a hand—no, a claw—grab her hair. She thought her hair would be pulled right out of her scalp. Her stomach heaved at the stench she smelled underneath the expensive cologne. It smelled of sewage and stale sweat and it was coming from the man’s skin. She shuddered in disgust, her heart fluttering in fear when she felt him sniff her, then lick her nape. His smell was familiar, but she couldn’t quite remember where she’d smelled it before. She struggled, trying to twist around to whack him on the head with her baton, but the hold on her hair was excruciating and she dared not risk moving for fear of literally having her hair torn out by the roots.

“I like the smell and taste of your fear,” the man said, his voice guttural. But before he could do anything more, Eirene heard a feral growl before it launched itself at her attacker, pushing her away.

Eirene didn’t wait to see who or what it was that came to her aid. Instead, she sprinted to where Devon lay. He moaned, moving his head from side to side, but remained unconscious. Eirene looked back at the fray. A man’s figure stood out of the shadows, fighting the men Devon had spoken to earlier, but he looked outgunned. Both men were attacking him simultaneously. She had to do something. Then she remembered the piercing whistle she used to break the glass. She fumbled in her pockets and grabbed it. She pressed down hard on the button. The men snarled, momentarily stopping the brawl.

“Let’s go,” her attacker spoke harshly to his companion, covering their ears as they whizzed out of the office at an unbelievable speed. She turned to look at the man left behind. She released the button and the man fell on all fours.

“Did you have to keep your finger on the button? My ears are killing me,” he growled.

Eirene’s eyes widened, then she frowned in irritation.

“You’re welcome, you ungrateful asshole,” she muttered. Standing up, she left the room to switch on the lights from the fuse box inside the janitorial room. The first thing she saw when she returned was the man’s back as he easily carried Devon to his office and lay him gently on the leather sofa, flushed against the left wall of the office. He straightened up and turned to face her. Her eyes widened.

This man was Finn Qualtrough.

Suddenly, everything she hadn’t been able to remember in almost seventy-two hours came back to her in a rush. Air whooshed out of her as though she took a kick in the gut. She walked backwards until she felt the bookshelf behind her. She gripped the lip of a low shelf to keep herself upright. Panic seared through her while she felt something else, something more.

His midnight blue eyes bored into hers. Even with her body suffused with anger and humiliation, his eyes still sent a message that seared her insides with an aching need. She sucked in her breath at the intense arousal she felt. It made her stomach quiver, her knees weak, and her womanhood throb. His pupils dilated like he knew the effect he had on her. Eirene saw tiny gold flecks appear in his eyes. They sent shafts of desire through her entire being. Even with his body several feet away from hers, she could feel his heat as if he was just a few inches away. She had never met a man who would ignite her body the way he did. Just being near him sent her imagination into overdrive. In her mind’s eye she felt his hands caress her again, shape and cup her breasts before his mouth sucked and worshiped her nipples. That was what had happened in the park. Her mind stung with the memory of her shame. He had rejected her.

Finn took a step toward her.

“Don’t,” she choked. Her throat was so dry, she thought she wouldn’t be able to swallow.

Isobelle Cate is a woman who wears different masks. Mother-writer, wife-professional, scholar-novelist. Currently living in Manchester, she has been drawn to the little known, the secret stories, about the people and the nations: the English, the Irish, the Scots, the Welsh, and those who are now part of these nations whatever their origins.
Her vision and passion are fuelled by her interest and background in history and
paradoxically, shaped by growing up in a clan steeped in lore, loyalty, and legend.
Isobelle is intrigued by forces that simmer beneath the surface of these cultures, the hidden passions, unsaid desires, and yearnings unfulfilled.