Today I am welcoming a neighbor to my West, Mike Faricy. He has a great new book out! Leave a comment, ask a question, or tell us your favorite detective either in books or TV, and be entered to win one of 2 ecopies of Last Shot: Case 6 that Mike is giving away. Don’t forget to put your email in your comment. Contest ends December 8 at midnight Central time.

Hi Ginger, Thanks for letting me go on, and on, and on about my books. I write books of no redeeming social value. My books are in the crime fiction genre, theoretically written with a sense of humor and even some romance. I just released my thirteenth book, Last Shot: Case 6. It’s the sixth book in my Dev Haskell series. Dev Haskell is an army vet and a private investigator with an eye for the ladies. He’s also a back slapping, well intentioned, wrong guessing guy who on more than one occasion makes a bad choice. Whether it’s his latest love interest or trailing a suspect, he’s known to not always make the proper decision. 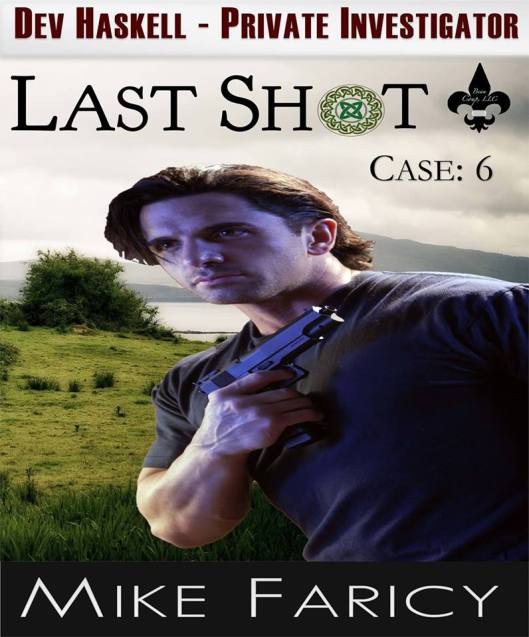 I’ve always been a voracious reader, ever since I was a little boy and my folks would take us to the library every week to pick out books. From that early point I began to write, although I think the first thing I wrote was probably on the wall and no doubt I was sent to my room. I still read a lot and I seem to inhale everything available from a specific author before I move on to the next one. Although I enjoy all the books I noticed a lot of the work dealt with an ex-special forces type who just wanted to be left alone, but some bad guy pushed too hard and now the hero is coming back with a vengeance and taking no prisoners.

My work isn’t quite like that. If you’re looking for a tale where international terrorists are stopped in their tracks, a government coup is discovered or bankers are conspiring to destroy the economy that’s not the sort of thing I deal with. No one is parachuting onto the roof of the flaming White House to save the nation. The situations my characters find themselves in are usually due to their own bad decisions. But then, bad decisions make for interesting tales. In the broad social pool my characters inhabit a level somewhere below polite society. We all know people like this, we just wisely like to keep them at arms length still, we are curious.

All my books are set in Minnesota, the Dev Haskell series is set in St.   Paul. The places Dev goes to, the streets he drives on, the operating hours of establishments are all the real deal. He frequents a local establishment called The Spot bar. The place is a real local bar, a neighborhood tavern if you will. Someone once described it as a biker bar which surprised me because I’ve never seen a motorcycle there. The guy explained it was a biker bar because everyone had lost their drivers license and they all have to ride bicycles. That might be a little far fetched, maybe, but it’s the sort of place that attends to the business at hand and the business is drinking.

Dev hangs out at The Spot, actually it’s more like a second home. More than once he’s had to take the back streets in an effort to avoid the police. A few times he’s left his car there and maybe hopped a ride from some misguided damsel. He often makes the mistake of drinking and dialing then gets a variety of recorded messages that says his number has been blocked or some woman ignores her caller id and ends up telling him to never, ever call her again.

I try not to dwell on the local scene too much, but I always hear from people who’ve been in town and they recognize a street or a building I describe. Dev meets with various individuals at a local coffee shop, Nina’s. He’s usually late by the way, morning isn’t his best time of day. Various restaurants, our court house, of course the Mississippi river all play a part in my writing. I also take to heart the comments I receive from fans. My fifth book in the Dev Haskell series is entitled Tutti Frutti. I had received a number of comments from fans, and one woman summed up all the comments nicely. She emailed me and said that she really liked the series, but that Dev always seems to end up with ‘a young, beautiful, well endowed woman and well, that’s not me anymore’. That got me thinking and in Tutti Frutti Dev ends up with a woman about twelve years older than he is. She maybe doesn’t quite have the figure she used to have and as a friend once told me, ‘What was the pride of my youth is now just a feat of engineering’. But, she wears him out, without going into detail let’s just say he finds it impossible to keep up with her and he has difficulty fulfilling her needs.

My latest release in the series is entitled Last Shot; Case 6. I should stop here and mention that I had a couple of book signings recently and I was amazed at how many people wanted to know first if I had a series and then, what was the order in the series. I have a standard response and tell folks the books are all stand alone, they can be read in any order. That didn’t seem to really matter. They wanted to read the series and they wanted to start with the first book in the series. Based on that, we’ve just redone or are in the process of redoing all the covers for the Dev Haskell series. So, the most recent release, Last Shot; Case 6 is identified as the sixth in the series. Yeah, I know, it sounds so basic and I was clueless…no surprise.

I’m currently working on a new series, I can’t really say a lot about it except that it is set in St.   Paul. The first book is entitled Corridor Man. I plan to release the first two books in the series around June of 2014. These tales are going to be a bit darker than the Dev Haskell work, but I think you’ll enjoy them. Once they’re released I’m back to writing the next book in the Dev Haskell series. I’m also putting together a trilogy of three of my stand alone titles, Chow for Now, Merlot and End of the Line. The trilogy will be available in e-format in February 2014. 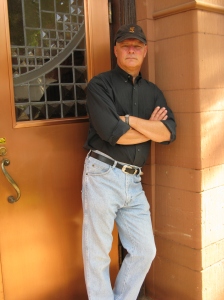 On a more personal note I should mention that my wife and I have a long distance relationship. I live in St. Paul and she lives in Dublin, Ireland. We travel back and forth so I’m in Dublin maybe six months out of the year, over the course of the year. It’s actually great for me because all our social life in Dublin is through her contacts. That translates to ‘no one ever phones me’ which means I get up in the morning and start tapping on the keyboard. I don’t work off an outline so at the end of the day no one is more surprised than me as to what has occurred. Then, about the time I’ve finished the chores on my ‘Honey Do’ list I suddenly find myself in the Dublin airport with my luggage. Actually it works out very well, she has always been a hundred percent supportive and a hundred and ten percent patient.

Thanks so much for slogging this far through my rambling on and on. Please check out my latest book, Last Shot: Case 6 on Amazon; http://www.amazon.com/s/ref=nb_sb_noss_1?url=search-alias%3Dstripbooks&field-keywords=Last+shot+by+mike+faricy

Many thanks, enjoy the holiday season and hoping we all have a great 2014.