I celebrated Halloween a little early by going on a ghost hunt/tour called Caves and Graves last Friday night. Earlier this summer while doing some research for the Gangster’s Kiss, a 1920’s romance I am working on, I found a nearby place that did gangster tours. It’s called the Wabasha Street Caves http://www.wabashastreetcaves.com/ and if you are ever in St. Paul it is definitely worth doing. We had such a great time that I knew we had to come back for the Ghost tours. 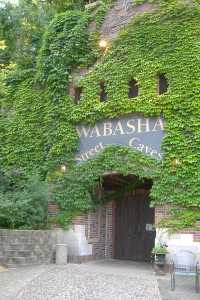 The tours are actually tour theatre. There are actors that portray parts. On the gangster tour, your guide will be different character from the era such as John Dillinger, Dapper Dan, or the Kissing Bandit. Our tour guides for the Graves tour were Nurse Ratchet and Keith Urban Legend. They were great!!

On the tour you ride around on some very nice deluxe buses. There are three spots in St. Paul that are on the list of most haunted places and we visited all of them. The first spot on the tour was a famous old mansion called Fourpaugh’s restaurant. http://www.hauntedhouses.com/states/mn/forepaughs_restaurant.htm  We didn’t go in as it is a working restaurant but our bus stopped outside and the guides told of the history of the mansion and the spooky happenings that have taken place there. 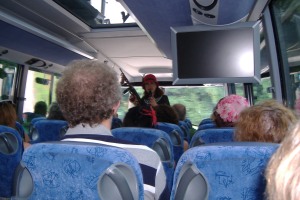 For about the next hour we traveled on the bus to visit other ghostly places around St. Paul. Some places were still there and visited quite often by ghosts while others were places that the buildings had been torn down but the ghosts still visited the new inhabitants. The ghosts were spirits left behind due to suicides, murders, accidents, and in one case a very stupid burglar.  He tried to rob a meat shop by plummeting down a 60 foot chimney with a 40 foot rope. It wasn’t the fall that killed him but the fact that someone started the furnace the next morning while he was still hung up. Apparently his fingers were worn to the bone as he struggled to climb the chimney and get out. Ewwww, right? The ghost use to work in the meat shop and was a boxer earlier in his life. To this day people occasionally see him shadow boxing. Recently the owners of the building found an old boxing poster. People that have seen the ghost boxing identified him as the man in the poster.

We also stopped by an old movie theatre from the 1950’s that I would love to visit. It is haunted by several ghosts, including a little girl that had been murdered nearby a long time ago. Visitors had often seen a little girl wearing a brown dress and red shoes which is what the girl had been wearing. In later years, a red shoe belonging to the girl was found in a previously empty room and is now on display in a glass case in the lobby of the old theatre.

In the middle of the tour, we returned to the caves for some ghost tales and ghost hunting. The caves were beautiful and lit by candle light. Keith Urban Legend told some ghost stories about different sightings that had taken place in the caves by tour guides and guests. I loved the stories of ghosts in gangster attire walking around. I would love to meet one of those. In am earlier post about the gangster tour I told about the legend of a few gangsters that are believed to have been left behind in the caves after a gunfight.

After the ghost stories we saw some slides of ghost images that have showed up on pictures taken of the caves. These are some of the orbs that showed up on my pictures during the gangster tour and they also showed up on the pictures I took that night. We were encouraged to track the ghost with an app called spud pickles. The app picks up orbs and words. I only picked up orbs on my app in one area, the area that had a tunnel and where several people had seen a ghost. Oh I forgot to tell you that the caves where the second place listed on the most haunted site list.

We returned to our bus and travelled to some more sites and made a stop at the Calvary Cemetery.  http://www.catholic-cemeteries.org/calvary.aspx Call me weird but I love visiting old cemeteries and this one goes back to 1856. Not only are the tombstones fascinating but this is also the burial place for many of the famous people you hear about on the gangster tour. We learned about some of the early types of tombstones and the significance of them. If you see a lamb on a tombstone, that was a Victorian marker for a child. Ivy meant eternal love. I am so using the ivy thing in my Work in Progress. This was a fascinating place and I hope to return here sometime, during the day, when I can take a closer look as some of these historic markers. 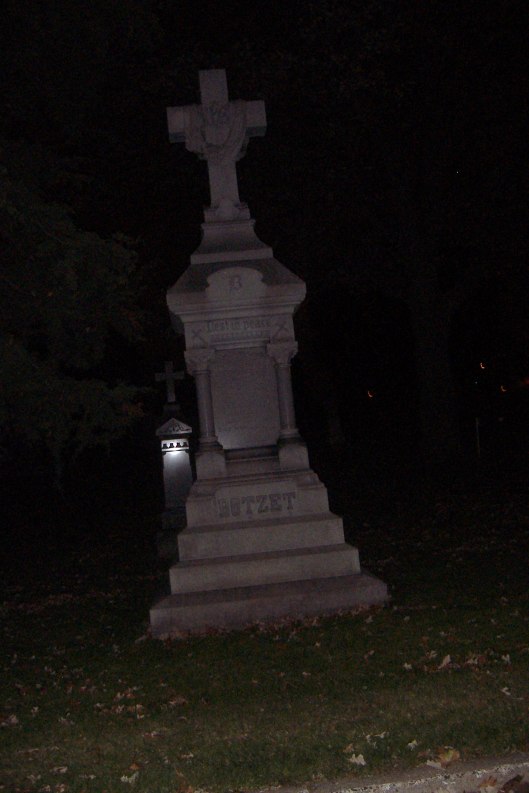 One of the things I love most about these tours and traveling through St. Paul is that the city has some fabulous historic old buildings. One of the best streets for sightseeing is Summit Avenue and the site of our third most haunted place. The place is 476 Summit Ave. http://www.hauntedhouses.com/states/mn/griggs_mansion.htm This place is home to not one but about 13 to 14 ghosts. It was thought that it had a speakeasy in the basement and there are several gangsters still hanging out there. It’s been visited by several psychics and ghost hunters. There is also another house across the street with ghosts and the nearby James J. Hill mansion has also had sightings.  Summit Avenue is very haunted and another place that I will be visiting and exploring again soon.

Well that’s what I did to celebrate Halloween. What will you be doing?