I work with guys and they are always a fun and entertaining group. The conversations pretty much surround sports, politics, hunting, guns, and what’s for supper. Even our treat days are different. No pretty cupcakes or petit fours in our department, heck we dine on whatever someone shot last. My favorite is the venison teriyaki jerky.  If you see Tom walk in with a crock pot, don’t ask, just eat. It is always delicious; we just don’t know what it is. We like to tease him about it containing mystery meat as you never know if you are eating beef, bear, or opossum.

You would think that after being around these guys for almost 10 years now I would have seen and heard it all but they always surprise me. With about half of them being Irish, the blarney and BS can get pretty high. I never know what is going to come out of their mouths. Just the other day, McSorley, one of the Irish guys was telling about how great his grandson was at sports. He said, ‘The dang kid’s so lucky he craps four leaf clovers’.

I thought that was hysterical and I’m pretty sure he used the word crap because I was in the room. Does that mean they always choose their words wisely around me? Heck no. I have unfortunately heard more discussions than I care to about prostrate problems and how many times so and so had to get up and take a piss in the middle of the night. I also know if Paul flags me to step out in the hall, I will be privy to his latest off-color and politically incorrect joke. He’s a hoot!

But one of my favorite things about the guys I work with is that they always support me. They could not have been prouder when I received a contract for my first book. They ask me every day when it will be out. The other thing these guys do is give me suggestions about topics to write a story about.

Just the other day, McSorley came up to me with an article about Jack the Ripper being in Wisconsin. This I had never heard of before. Supposedly Jack had been in the town of Hurley. I have never been to Hurley but the town has a reputation for being wild, woolly, and very wicked. I once went to a wedding in which the groom and best man were from Hurley. During the wedding dance I saw the best man drink enough booze to kill a normal person and when he wasn’t dancing up a storm, he was shouting at the top of his lungs, ‘I’m from Hurley, where highway 71 ends and the fun begins. Woohoo’. Heck, Al Capone, Dillinger, Baby Face Nelson, and others use to come there to relax. Al’s brother, Ralph Capone, had a cabin there and later retired in the community. In 1974 he passed away in one of their a local nursing homes. 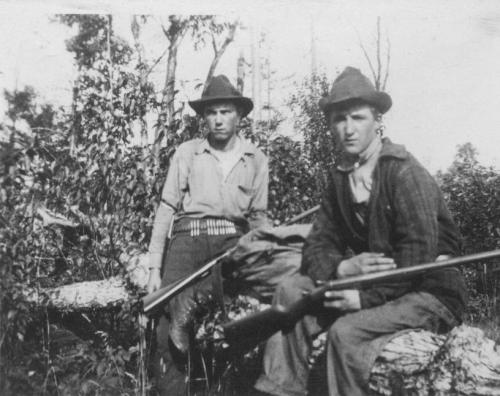 Anyway back to the Jack the Ripper story. The same Jack the Ripper that murder several prostitutes in Whitechapel England in the late 1800’s never was in Hurley but the demise of a local women had people wondering. Hurley has long been known as the sin city of the North. It has a history of gambling, prostitution, and in the 1920’s, it totally ignored prohibition. In the 1890’s the town had several houses of ill repute and one of its dance hall beauties named Lottie Morgan was found in an alley with an axe in her head. The murder is still unsolved but with the Whitechapel murders happening around a similar time and also to prostitutes, it was thought that she may have also been a victim of the Ripper.

I am working on a prohibition era book in which the character’s sister goes missing. I had been trying to figure out what had happened to her and when Mr. McSorley handed me this interesting piece of history. It gave me some great new ideas.

So I guess what I am trying to say with this post is that you never know where ideas will come from. For some writers it is a news article, a song, a business card or some other little spark. Mine come from the guys I work with. If I ever happened to be at a convention and people start talking about their muse, I’ll be the one in my chair slinking lower, as my muse is a McSorley whose grandson shits clover. 🙂

11 thoughts on “My amuzing muse and Jack the Ripper was in Wisconsin!!”