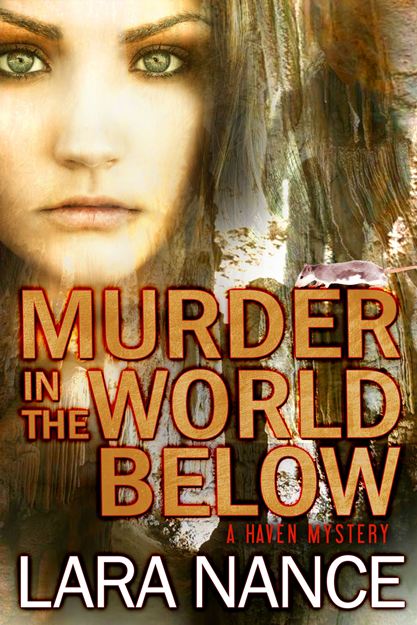 Lara Nance grew up and lived in many cites through the South. She started out with a career in business/marketing for twenty years and then went back to school for a masters in nursing and is currently a nurse practitioner in Virginia Beach, VA.

From ghosts, witches, and energy vampires to thrilling mysteries and Steampunk tales, she is willing to explore a variety of compelling adventures full of danger and suspense, along with a touch of romance. Lara loves to weave interesting true historical tidbits into her fiction which invite the reader to explore further after the novel is finished.

Currently docked in Norfolk, Virginia (until the wind changes) Lara enjoys living on her sailboat and spends time reading, of course writing, indulging a variety of artistic endeavors, cooking and sailing with her husband, Joe and their Yorkie, Rio.

About Murder in the World Below

Murder in the World Below introduces a tight-knit community of second and third generation survivors of a government institutional system that went horribly wrong at the hands of people in control.

A Haven Mystery
In 1922 the federal government built the largest facility for handicapped children in the country, hidden in the Shenandoah Mountains of Virginia. It was closed forever in 1960 amid horrifying stories of deplorable conditions, overcrowding, illegal testing and sexual abuse of the young inmates.

Sixty-one years later, the academy is now a community college, all trace of its evil past swept away. Or is it? For under the campus of renovated buildings, escapees from the academy and their descendants still live in an elaborate series of tunnels and caves, hiding their differences and fear of the upper world.

Haven, as the residents call their underground home, is a happy, thriving community until they learn their source of power is about to be cut off. A resourceful young woman named Awen sets out to find an alternative source of energy. But someone in Haven is murdering people and sabotaging her efforts.

Aided by a professor from the college, Awen is in a race to expose the killer and hunt for a source of energy that will save Haven. Unfortunately, the murderer now has their sights on Awen as the next victim, and time is running out for the world below.

A Sneak Peek at MURDER IN THE WORLD BELOW

Billy Two flung aside the tarp and stomped into the small cave Awen Four used as her bedroom. She jumped, startled. Her rat, Coco, squeaked then dove into the crook of her arm.

“Damn it, Billy!” She huffed. As usual, the young boy disregarded Haven’s rules of privacy.

“Old Harvie’s dyin’.” He grimaced then flopped into a battered armchair, his face grim, rounded cheeks streaked with a layer of perpetual dirt. “Shit’s gonna hit the fan now.”

“What? I saw him this morning. I thought he was better.” A chill crawled over her skin. They couldn’t lose Harvie. The Boss. He was the heart and soul of Haven. “It must be a rumor. People are scared.”

She stroked Coco who’d poked her head out, blinking dark sparkling eyes at the boy.

“Nope, he’s dyin’. Now Kinnik’ll take over and you know what that means.” He pressed his lips together in a thin line. He took off his newsboy cap and smacked it against his knee. He pulled open a much patched wool jacket, revealing layers of several T-shirts, two button-up shirts, and a sweater vest.

Awen stared at him askance. Maybe it was denial, but Harvie seemed too integral to Haven to die. A part of their secret world would diminish in his absence, and she feared it would be the best part.

“Heard it from Pop himself,” Billy insisted. He rubbed a hand under his nose and planted his cap over matted brown hair. “I overheard him talkin’ to Joe outside the group room. He’d come from Harvie’s place ‘n said the Boss was going downhill fast. He went lookin’ for Kinnik to tell him.”

“Oh, no. This is horrible.” Her heart lurched. Harvie wasn’t just important to Haven, he was the dad she never had. She ran a hand through her hair. What were they going to do?

Praise for MURDER IN THE WORLD BELOW

“Lara Nance’s writing shines brightest when she’s building new worlds. Murder in the World Below will draw you in where her characters win your affection. Her story takes you on a grand adventure, and you never want to leave.” – Author, Laura Kitchell

2. Award of Merit for Best book by a Virginia Author in VRW’s Holt Medallion contest in 2012